This is a great and wondrous day: rejoice, my gentle snowflakes! For Our Infallible Hero, the great Moisés Silva, was born on September 4, 1945, which makes this his 75th birthday. 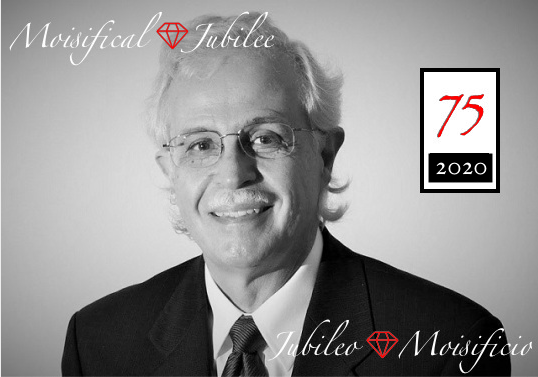 Needless to say, Bouncing into Graceland has largely fallen silent in recent years. An auspicious new beginning in late 2017 was quickly followed by a parish assignment, an interstate move, and the birth of a new child, all of which things have kept me quite happily occupied. Nevertheless, I have never given up the Chief Burden of this blog—namely, to spread the knowledge of the infallibility of Moisés Silva throughout the land—and have continued my sedulous labors to this end both one-on-one and through alternative forms of online presence. Yet reasonable as all of that may be, the Year of Our Lord 2020 demands that this silence come to an end: for this unusual year, which seems to contain centuries, brings together on this day two glorious remembrances. I speak, of course, of the 75th Moisifical Jubilee and the 10th anniversary of International Moisés Silva Day.

Surely the inauguration of a solemn jubilee in connection with the 75th birthday of the only human being in possession of personal and comprehensive infallibility in all matters of which he speaks requires neither extensive commentary nor justification. After all, Elizabeth Windsor of the House Formerly Known as Saxe-Coburg-Gotha saw fit to celebrate with untold splendor a mere 60 years of rule over a dwindling Empire in 2012, and the public just ate it up! How much more, then, shall we jubilate on account 75 years of an infallibility which neither dwindles nor diminishes.

Similar considerations prompted me to conclude in 2010 that Our Infallible Hero’s dies natalis should be marked by great and splendid festivities, which resulted in the solemn and universal proclamation of September 4 as International Moisés Silva Day, to be celebrated thereon in perpetuity. Though the City of Litchfield, longtime place of residence of Our Infallible Hero, has thus far failed to take notice of this significant annual commemoration, I am pleased to take note today of its first full decade (!).

All of the foregoing has naturally got me thinking about what could be done in the next 10 years to advance the cause of Moisifical Infallibility, and I have decided that the obvious answer is the production of a magisterial monograph attending to the various aspects thereof, and to be entitled: MOISÉS AND THE THREE. Perceptive readers will quickly realize that the title is borrowed from “St Paul and the Three,” one of the “dissertations” or extended essays that accompany the commentary on St Paul’s Epistle to the Galatians by the great J. B. Lightfoot, late Anglican Bishop of Durham (the 130th anniversary of whose death was observed on 21 December 2019).

This is not, of course, mere accident. After all, in a recorded class lecture1 Our Infallible Hero informs us that, while students have accused him of bowing his head idolatrously when mentioning the name of Lightfoot, the latter “is probably the greatest New Testament scholar that God has given his church” (14:20). Indeed, Our Infallible Hero has also been recorded clearly speaking of “my idol Lightfoot,” and has even asserted in print that he reserves the term “perfect” for him alone.2 Thus we can readily see the deep and meaningful connection between the infallibility of Moisés Silva and the perfections of Joseph Barber Lightfoot. And of course, Lightfoot did not flourish on his own, but together with his two great Cambridge friends, Brooke Foss Westcott and Fenton John Anthony Hort. Now, Our Infallible Hero has called himself “an unrepentant and unshaken Hortian” in print at least once, going on to note that Hort’s achievement was “in collaboration with Westcott, and less directly, Lightfoot.”3 On this account, then, it is only natural that we should take all three together with respect to Silva, even as Lightfoot takes Peter, James, and John together with respect to St Paul. As the same Silvanic class recording mentioned above rightly notes, these fellows “were part of a trio—not a musical band, but something much more exciting than that” (14:00).

Nor is this all: the Lightfoot-Silva, perfection-infallibility connection is drawn explicitly in the Silvanic corpus itself. In the introduction to a 1983 lecture, the main body of which was later published as “Betz and Bruce on Galatians” (WTJ 45 [1983] 371-85), Our Infallible Hero has this to say:

“In the year [1857], the Journal for Classical and Sacred Philology carried an article reviewing several recent works on the epistles of Paul. This rather lengthy review article—it was about 40 pages long—immediately established its author, who was then only 27 years old, as a force to be reckoned with in biblical scholarship. Within a decade this young scholar had published a commentary on the Epistle to the Galatians destined to become one of the most influential works of the century. And it is remarkable that even today, about [126] years later, this work is widely regarded not only as an indispensable tool for the understanding of the Epistle to the Galatians in particular, but also as perhaps the finest model we have for the proper exegesis of the Pauline writings generally. Now this young man’s name was, of course, Joseph Barber Lightfoot. And here I stand before you today in order to review two recent works on Galatians. This lecture is supposed to evolve into a review article and to be published in the Westminster Journal this fall—if the editor accepts it4—but the historical significance of the lecture, you see, is that I am hereby announcing my candidacy to become the Lightfoot of our generation.”

“The Lightfoot of our generation”! A new Lightfoot; a better and greater Lightfoot; in a word, the one to whose infallibility the perfections of Lightfoot point: hear ye him. This and many other points will be treated exhaustively in MOISÉS AND THE THREE, though I regret already that the massive length of this monograph (expected to be much longer than even Christoph Uehlinger’s Weltreich und “eine Rede”) will surely mean that a number of important Silvanic teachings cannot be included. Take for instance, this enormously significant bit derived from his recorded lectures: Our Infallible Hero’s calculations appear to indicate that any time you may add to your life by exercising only equals the amount of time you wasted exercising in the first place. This speaks to a fundamental principle of the universe: that, as a theologian friend of no small consequence told me just a few days ago, it’s all about “quality of life” rather than “quantity of life.” Be that as it may, I hope to write multiple scientific studies on these precious Moisifical obiter dicta during the decade after this one—which would be my fifth, so I will undoubtedly end up eating a salad and running a lap or two just to make it there.

Finally, and because every jubilee requires an anthem, I am enormously pleased to present to you some lyrics I have written, set to a peppy tune composed by Alfred Judson for a hymn by Haldor Lillenas. And to Our Infallible Hero, the teacher of us all, the great Moisés Silva on his 75th birthday: MANY YEARS, with gratitude!

Anthem for the 2020 Moisifical Jubilee

Once I was bound by spectres of Cremer
Theologizing Greek words in vain;
But I was freed from voodoo linguistics
When Silva broke my fetters in twain!

Freedom from Fee and Arnold’s objections,
From Caragounis and his complaints;
Freedom in Our Infallible Hero,
He who has rent our fetters in twain!

1 This material comes from the Westminster Theological Seminary course  NT 111, General Introduction to the New Testament, recorded in 26 parts and available at the Westminster Archive Media Service. The linked lecture is part 16 of 26.

4 Our Infallible Hero served as editor of the Westminster Theological Journal from 1982 to 1991. Similarly, it bears noting that J. B. Lightfoot edited the Journal of Classical and Sacred Philology for its entire run (1854-9). Let the reader understand.

A blog about the Bible, Liturgy, Translation, and the Infallibility of Moisés Silva.